Evening on the Rails 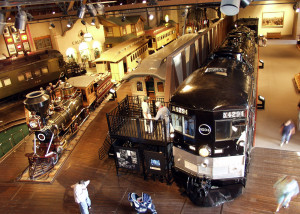 Thursday night, ticketed attendees will have full access to this world class facility and dinner will be served in the round, surrounded by the beautifully restored engines and rail cars. Not to mention, there will be live entertainment. Tickets can be purchased for only $45 with your online registration for the conference.

First opened to the public in 1976, the California State Railroad Museum complex is one of Sacramento’s largest and most popular visitor destinations. Over 500,000 visit the Museum annually, with guests traveling from throughout the world to experience this world-renowned facility.

With over 225,000 square feet of total exhibit space, the buildings within the California State Railroad Museum complex use stimulating exhibits, enthusiastic and knowledgeable docents, and beautifully restored railroad cars and locomotives to illustrate railroad history in California and the West.

Throughout the main Railroad History Museum building, 21 meticulously restored locomotives and cars and numerous exhibits illustrate how railroads have shaped people’s lives, the economy, and the unique culture of California and the West. Included are a Pullman-style sleeping car, a dining car filled with railroad china, and a Railway Post Office that visitors can actually step aboard. Click here to see some of the Museum favorites.

A visit to the California State Railroad Museum is a not-to-be-missed experience that will be enjoyed by persons of all ages and abilities.

We expect up to 30 or more MCCs to be on display, from a variety of disciplines and organizations, in a myriad of sizes, shapes, and configurations

All Attendees to the Western Regional Conference on Thursday will have free admission to the MCC Rally. You must be registered to attend, click here to register.

Classes: The CA MCC Rally will also host a number of relevant classes/seminars, including:

For more details, to offer a class, be added to our e-mailing list, or to reserve a spot for your command/comm unit, please contact Randall Larson, 2014 MCC Rally Plans Section Chief, at editor911magz@gmail.com

For more information, visit the web site at www.9-1-1magazine.com/CA-MCC-Rally 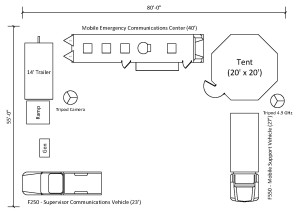 Ever wonder what goes into a large emergency response setup? The City of Palo Alto will have their entire Mobile Emergency Operations Center on display in the exhibit hall. Over 4000 square feet of floor space will be used just for their setup. There will be a number of assets available to view in their exhibit including: 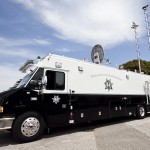 Mobile Emergency Operations Center:
This bus-sized mobile command vehicle is capable of serving as a back-up EOC, an Incident Command Post (ICP), and (with some lead time) a back-up Public Safety Answering Point (PSAP) 911 Center. The MEOC features a full interoperability system (Sytech RIOS), capable of transmitting or patching on a wide spectrum of frequencies from HF through microwave. In addition, the MEOC has a satellite dish for voice and data. The MEOC also includes a Barrett HF NVIS radio system, capable of communicating with the National Guard, the military, State OES, and other entities.

The MEOC is used about every other week, on average, and is often deployed to: 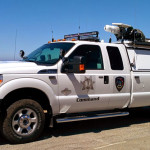 MEOC Support Vehicle:
The MSV is a Ford F-550 (4WD) Prime Mover, configured with a stake bed, lift gate, diesel fuel tender, and other features to support the MEOC, an ICP or other field deployments.

Incident Command Post (ICP) Trailer:
This trailer is currently being upfitted. When completed, it will house the Western Shelter Gatekeeper command post tent, along with other needed supplies to stand up an ICP.

Can you buy tickets at the conference or do they have to be purchased ahead of time for Evening on the Rails dinner?

Leave a Reply to admin
Click here to cancel reply.